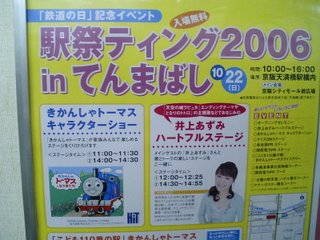 It took me a while to figure this out. The kanji in the upper left mean "station" and "festival". This is followed by katakana that is pronounced "tin-gu" and then the year, "2006". The pronuciation of the two kanji are "eki" and "sai" respectively.

Adding these all together, we get "eki-sai-tin-gu 2006" -- Exciting 2006, the name of an event sponsored by the Keihan Railway (Osaka) at one of the main stations, feature live performances, etc.

We can assume that the intended audience is expected to know enough English to decode this pun, although I suppose "Station Festival (gibberish) 2006" would still carry the main meaning. Certainly my mother-in-law would never have understood, but then, she isn't quite the type that the train line is intending to attract!
Posted by Tom Robb at 8:29 AM No comments: