Can old folks understand this? 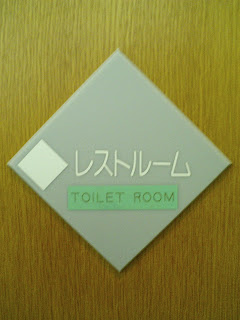 Here is one example of inappropriate use of English. This sign in my sports club originally had no label on it saying "Toilet Room" (not that it would be correct English). It only had the Katakana which said "Resutoru-mu" (Restroom). I saw old men from time to time wandering around the locker room obviously looking for the toilet, but not being able to find it until someone pointed it out to them. Even if they could understand that the Katakana came from English, how would they ever know that it was NOT a place to take a rest! :-)

Finally the management wisened up and added the label in English saying "Toilet Room". Now that was an improvement perhaps, but it still assumed that the club members could read English words. It suppose it just wouldn't have been good form to clearly say in Japanese "トイレ" (From the English "toilet") or お手洗い ("hand washing place") which would have been much clearer, but probably not as elegant.
Posted by Tom Robb at 3:42 PM No comments: