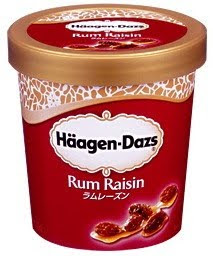 Many food products and beverages in Japan, particularly snack foods are labelled with large English letters accompanied by smaller wording in Japanese. It's almost as if the Japanese were braille -- just there for those who need special assistance. Take the Häagen-Dazs container on the right. It says "Rum-Raisin" in large letters with kana underneath that is perhaps 40% the height of the English.

As mentioned in my previous posting, however, the words are not the only way to identify the product. Invariably, there is a graphic, as well, that will clue the consumer in even if the English isn't understandable. But can people really tell the flavor by the graphic? My seminar class performed a mini-experiment over the summer vacation (2007), taking graphics of various ice cream and pretzel-stick products ("Pocky") and masked the lettering. They then asked friends and relatives of varying ages to identify the flavor. Not surprisingly, those below 40 were much better at identifying the flavors than older people, although the small sample size (32 people) doesn't allow us to draw statistically significant conclusions.
Posted by Tom Robb at 11:53 PM No comments: